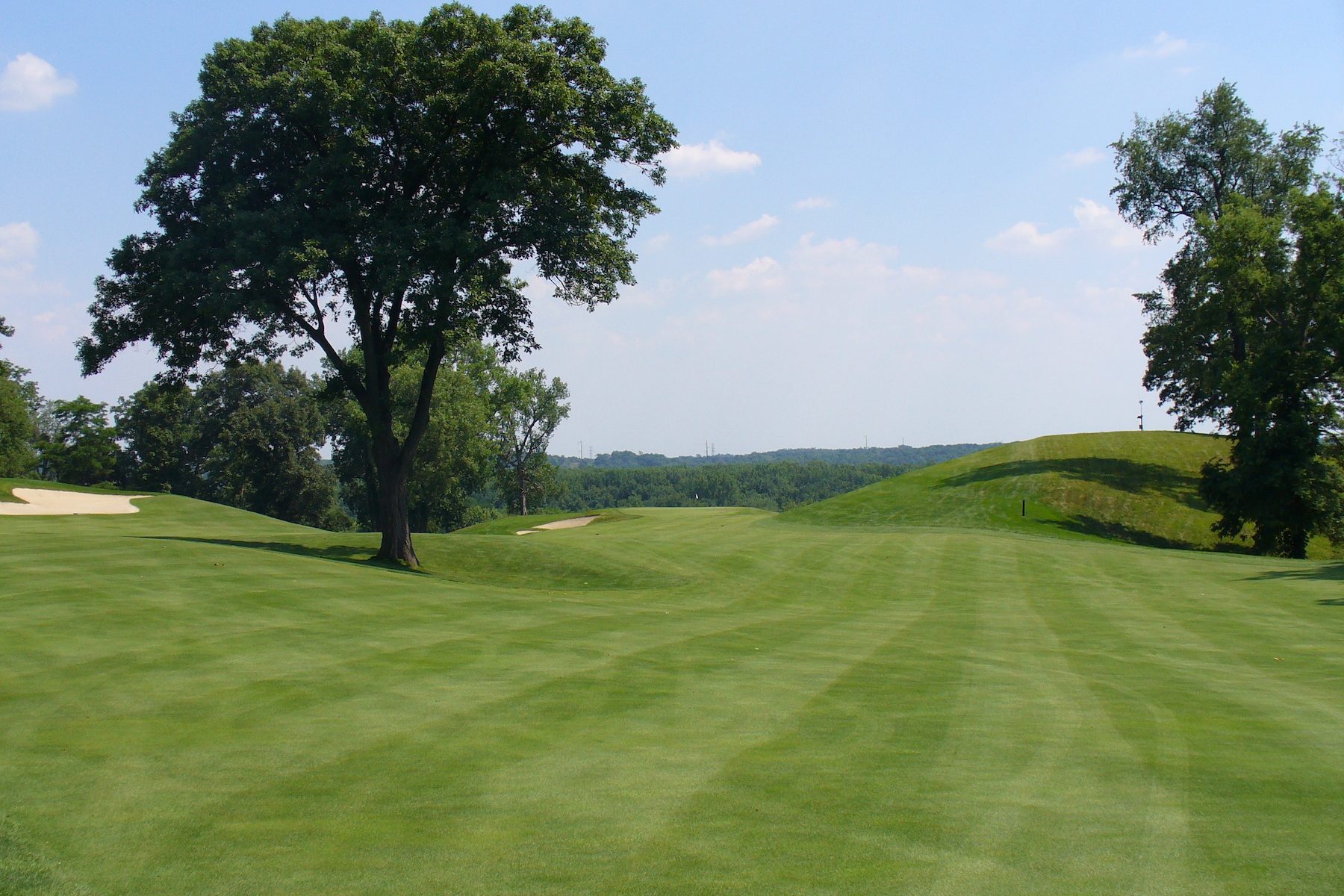 TPC stands for “Tournament Players Club.” The TPC network spans North America, and includes some courses in the Caribbean, Latin America, and Asia. Over half of them are private, many more are exclusive resort courses, and a handful have hosted PGA Tour events.

TPC Deere Run in Silvis, Illinois (just across the river from Bettendorf, IA), is the long-time venue of the John Deere Classic, traditional Tour stop the week before The Open (British). It is unique among the TPC courses not only because it is a regular PGA Tour host that is fully open to the public, but also because it is easily the most affordable of all TPC courses.

And when I say “affordable,” I mean it. Rates at TPC Deere Run top out at $119 – that’s peak time, inclusive of cart and unlimited use of practice facilities. But savvy and flexible players who are non-local residents can find rates as low as $59. Local residents don’t have to pay more than $69—ever—and can play for as little as $49.

Let me repeat that for the readers who just joined us: You can play the self-same course where the pros play every year for less than $60.

The tournament that is today The John Deere Classic was born in 1971 as The Quad Cities Open, at a local private course. The ensuing years as a Tour event were tenuous, to say the least, but after Tiger Woods turned pro and made a splash at the 1996 playing, Illinois native D.A. Weibring negotiated with John Deere and the Tour to design and build a TPC on the banks of the Rock River. When TPC Deere Run opened in 2000, the 7,213-yard par-71 layout was ranked as the 8th Best New Public Golf Course by “Golf Digest.” And it’s been hosting the Tour event ever since.

If you watch the pros on TV, they can make it look like a pushover. Paul Goydos carded a 59 here in 2010—and didn’t win, because several other players went ultra-low, too.

But don’t let the super-humans on Tour fool you: TPC Deere Run is all the course amateur players will ever want. Conditions are impeccable, and the variety of holes is outstanding: Long and short par 3s, 4s, and 5s. Some open fairways, some tight fairways. Over 70 bunkers, and plenty of water. Opportunities for both greatness and disaster.

The variety of holes will allow you to hit – or try to hit – a full array of shots off the tees, though most par 4s on the front set up best for fades. There are seven sets of tees, including two sets of blended tees to allow players of all skill level and all lengths to find a fit for their games, from 5,179 yards up to 7,183 yards. Generous landing areas provide opportunities to approach greens from multiple angles, only a few of which are truly optimal.

The 561-yard 2nd is one of the favorites of anyone whose played here before. From the elevated tees, the vista is expansive. The Rock River flows serenely in the distance beyond the huge fairway, which bends gently to the right on the second shot. The green is protected by a small desert’s worth of sand, and a small barn behind it harks back to the agricultural roots of the area and the sponsor of the tournament played here. 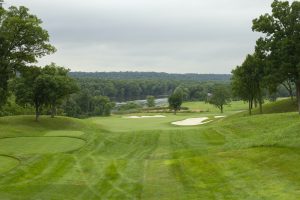 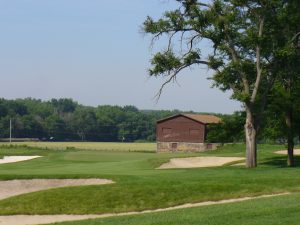 The green on the par-5 2nd is receptive and, well, homey.

At the 454-yard 4th, you realize that you are in for a day of one gorgeous golf hole after another. The sentinel oak in the center of the fairway makes the tee shot thrilling, and form the fairway, it feels like the river lurks just beyond the putting surface. 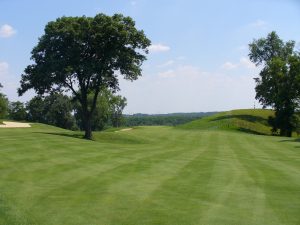 Choose your approach club wisely at the 4th — the Rock River lurks at the bottom of the hill behind the green.

The 158-yard 16th is one of the prettiest short par 3s in the entire Midwest. The green is cut into the bluff overlooking the river. A rock wall runs in front of the green, and the bluff drops away precipitously to the left, making the entire left side a very penal hazard. When the tournament bleachers are still up behind the green, this is a hole that gives anyone the chance to hit a good shot and feel like a pro. 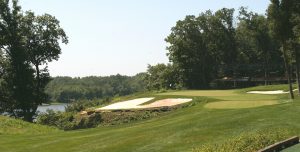 The 17th and 18th are two fun closers – the stuff that memories are made of. The 557-yard 17th is a reachable par 5 that plays out of a chute of trees to a wide-open fairway and green complex that allows for run-up fairway woods. The 463-yard 18th has seen its share of drama during the tournament, and amateurs can feel some degree of the same exhilaration by carving in a slight draw to the front of the green and watching their ball trundle back toward the pin. Over-cook it, though, and you’ll find the pond that borders the entire left side of the green; fade it instead, and a tricky pitch or sand save will be required, á la Jordan Spieth’s first PGA win.

The par-5 17th has an open green and makes a good target to try to get home in two. 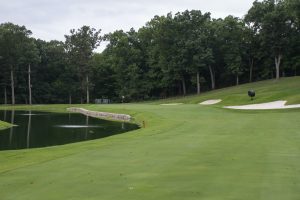 You can almost hear the cheers from the gallery as you come down the 18th fairway at TPC Deere Run.

The word on TPC Deere Run

The front side of the TPC at Deere Run is tighter than the back, with nearly every hole framed by trees on all sides. The back nine is more open, with some room along the fairways, but there are many more fairway bunkers in play on the back. There is not an awkward tee shot on the entire course; all the trouble is laid out clearly before you on the tees and approaches (with the exception of the approach on No. 4, where little separates the back of the green and the Rock River).

The greens are ideal – receptive but fast – and many are basically pear-shaped, with narrow fronts that make for some devilish pin positions. Despite some tiers and undulations, though, putts within seven feet are generally flat. Most greens are also surrounded by closely shaved run-off areas that will test all the short shots in your bag.

The clubhouse is a grand fieldstone structure, and houses a first-class restaurant and bar, with a lovely shaded patio overlooking the 18th green. The pro shop is consistently rated one of the best in the country, so take some time to browse. The walls are filled with memorabilia from the PGA Tour event that has been played in one form or another in the Quad Cities area since 1971. It is well worth coming early and staying late not only to avail yourself of the luxury of a TPC, but also to bathe in golf history. After all, how often do you get to play where the best in the world play? 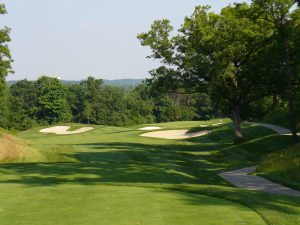 The short par-4 14th is as tricky as it is lovely.